December 3rd, 2012 - These are the Top Line findings of a Global HR Survey by the executive search firm Pedersen & Partners conducted among 297 global and regional HR directors from international companies. Among them, more than 100 are Fortune 500-companies.

1. Where do your expatriate CEOs / Country Managers originate from? 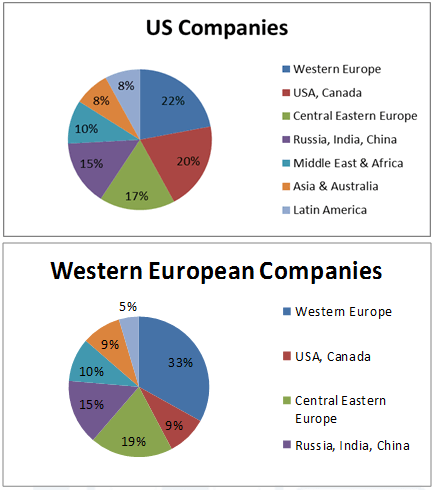 2. Why do you employ expatriate CEOs / Country Managers?

Companies assign expatriate country managers for 3 main reasons:
• Business needs in the host country: The main goals are to grow business and help develop local talent.
• Implement corporate culture, structures, and processes in the local organization.
• Develop the management skills of the expatriate: In many companies, a successful international assignment is a prerequisite for further career development within the corporation and part of the leadership strategy. 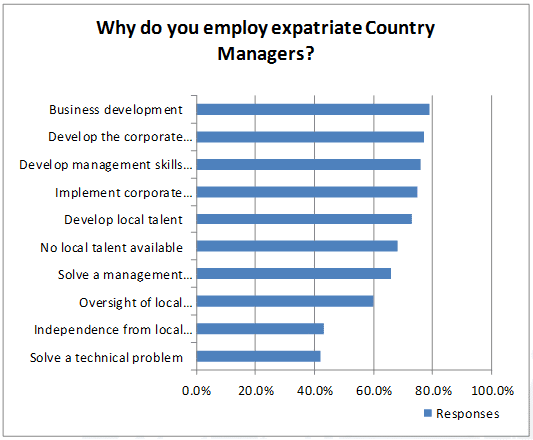 3. How has the number of expatriate CEOs/Country Managers in your company changed in the last 5 years (2007-2012)?

The number of expatriate country managers has on average remained the same. 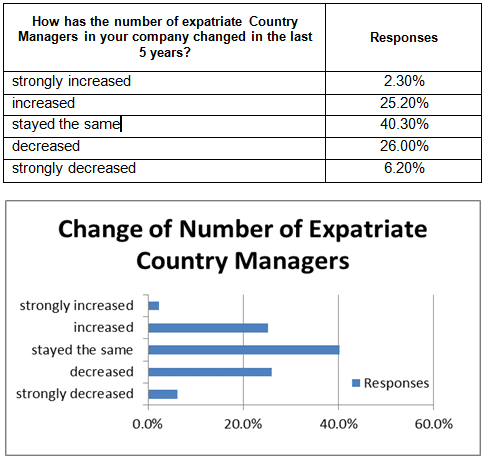 4. Did the economic crisis influence your expatriate policy in the last 5 years?

5. Compared to the cost of a local CEO/Country Manager (= 100%) what is the average total cost for an expatriate CEO/Country Manager in % including salary, bonus, company benefits (company car, insurances, etc.), and allowances (housing, school fees, etc.)? 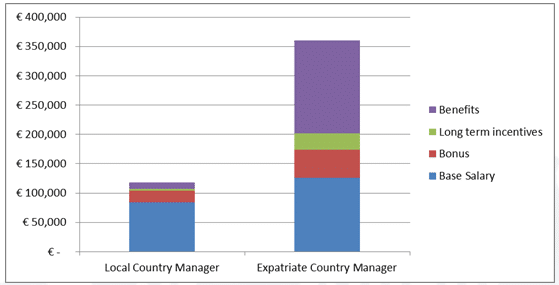 7. How satisfied are you with the success of expatriate CEOs /Country Managers?

On average, companies are satisfied with their expatriate programs. Their experience shows that it is easiest to reach goals related to the implementation of corporate structures and processes. Given the limitations of language and cultural barriers they report the greatest difficulties in people related issues. Expatriates can in many cases only be leaders and facilitators while they depend on locals for implementation and execution. Therefore, many companies report that success largely depends on the individual manager and less on the system of expatriation.

8. Among the expatriate CEOs/Country Managers in your company how many were recruited externally (in %)?

9. How long is the term of an expatriate CEO/Country Manager typically?

78% of the participants state that the average term of an expatriate Country Manager is between 3 and 5 years.

10. Is it your policy to replace expatriate CEOs/Country Managers with local managers? 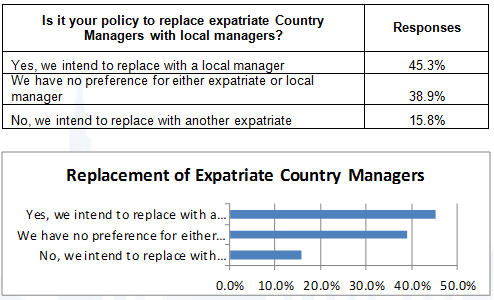 If you would like to conduct an interview with a representative of Pedersen & Partners or have other media-related requests, please contact: Mark Anderson, Marketing & Communications Manager at: mark.anderson@pedersenandpartners.com