Executive Compensation Study: Analysis of the value of the annual compensation earned by senior executives by country and worldwide, "Capital"

Kiev, Ukraine - The past 12 months have seen a 3.5% increase in the average value of the monetary compensation earned by senior executives holding key positions in the largest companies in the world – up to €1.4 million per year. This increase occurred across both revenue components, with the base salary increasing by 3.1% to €681 thousand, and short-term bonuses increasing by 4.2% to €719 thousand. These conclusions come from global research conducted this autumn by the international recruiting company Pedersen & Partners, which carried out an expert analysis on the results of a survey of 1 700 thousand senior executives representing 330 major international corporations in 17 countries. The executives were from companies with an average of 133 thousand employees, an average turnover of €42 billion, and profit of €4.1 billion.

According to the experts at Pedersen & Partners, recent years have been characterized by a slowdown in the growth in compensation earned by the world's top managers: the growth rate of monetary compensation dropped by almost half compared with the average rates over the last five years (3.5% from 6.9%).

The study shows that company size is a key factor in determining the level of compensation for senior managers. It is hardly surprising that CEO incomes tend to increase with subordinate numbers. The average compensation of an executive managing a team of international experts with over 150 thousand personnel may exceed €2 million per year.

On the other hand, a Director General is fully responsible for the continuous improvement of the efficiency and financial performance of the corporation. Thus, if the company decreases its profits before its obligations are paid, the amount of bonuses awarded to the top management could drop by nearly 30% compared to the previous year. 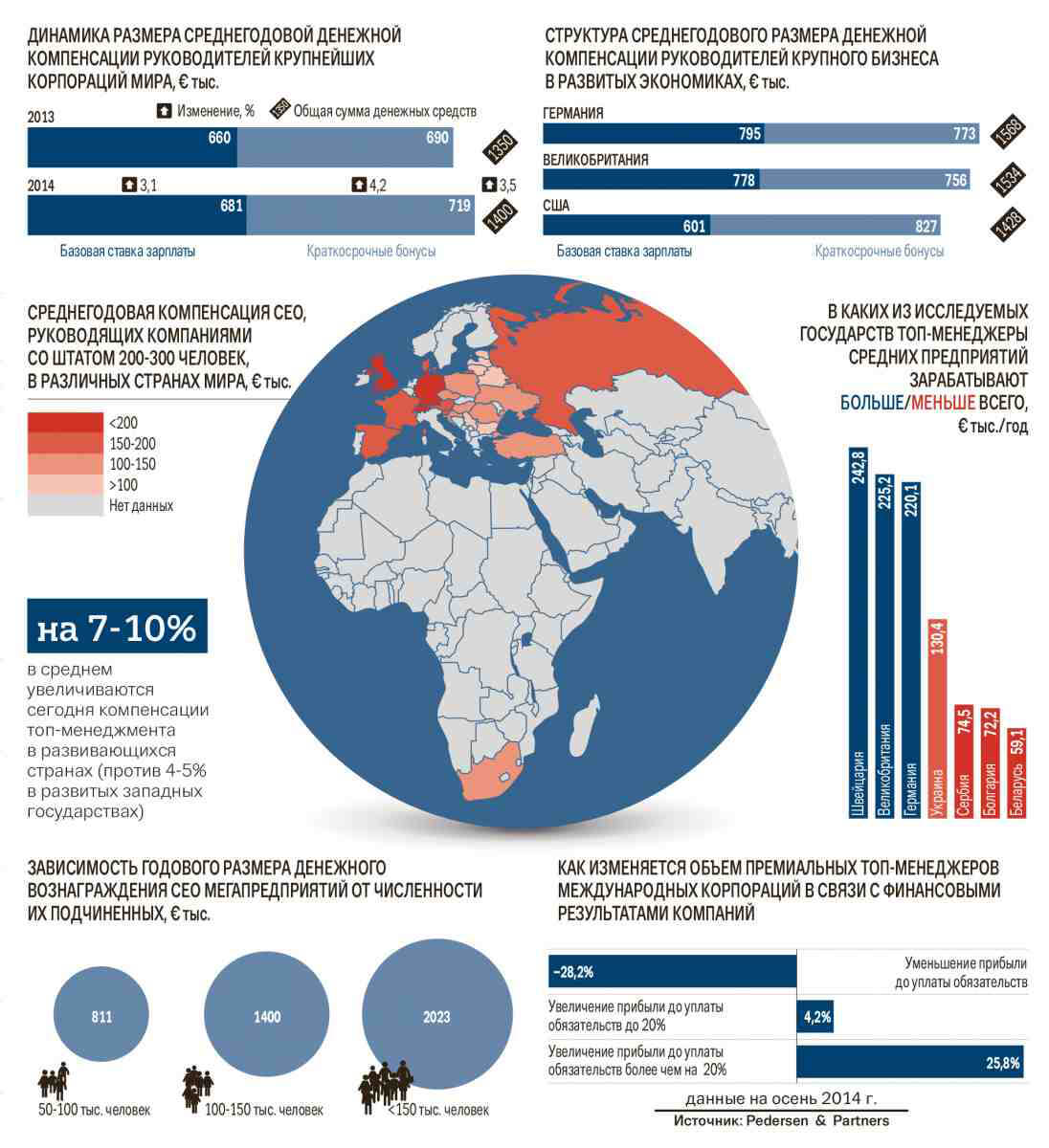 Because many countries have no large corporations, the experts estimated the average income of an executive from a company with a maximum of 200 - 300 employees, using data from 23 countries. The average value of the monetary compensation of the CEO of a small Ukrainian company is equivalent to €130.4 thousand. This puts Ukraine 13th in the international rankings, between Czech Republic and Hungary, where on average, top manager compensation has increased to €132 thousand and €122.9 thousand per year respectively.

Among the countries under analysis, the best-paid executives of medium-sized companies are found in Switzerland, Great Britain, and Germany, where they can earn more than €200 thousand per year. At the other end of the scale, the average annual income of a CEO in Belarus does not even reach €60 thousand.

Written by Kirill Podbereznyj on 28 November, 2014 for Capital
Read online:
Executive Compensation Study: Analysis of the value of the annual compensation earned by senior executives by country and worldwide
Download the original in PDF:

Executive Compensation Study: Analysis of the value of the annual compensation earned by senior executives by country
In the mediaInsightsKievUkraine