Challenging times in the Automotive Supply Chain: Lessons from Tesla

Within the last couple of years, it has been almost impossible to have a conversation with an automotive executive without the topic of Supply Chain featuring heavily.

Automotive manufacturers (OEMs) and their suppliers have been challenged in two main ways:

Disruptions arising from Covid, and now the war in Ukraine, have also added to the industry’s woes, particularly in terms of supply cost, and these are likely to continue.

It is probably fair to say that although Supply Chain has been a tremendous headache for Automotive OEMs and their suppliers, many players were to some extent ‘the architects of their own demise’. Automotive OEMs and their suppliers have sometimes behaved unreasonably as buyers, thinking tactically about short-term challenges rather than concentrating strategically on long-term supply sustainability.

However, one exception to this general ‘rule’ may have been Tesla.

In 2020, as the pandemic and lockdown measures first started to impact demand, many automakers cut their chip orders. At the same time, many semiconductor manufacturers switched their priorities towards their less ‘challenging’ and more profitable customers.

Meanwhile, Tesla anticipated continuing demand over time, and as a result, never reduced its production forecasts with suppliers. This left Tesla in a position where it was much more able to weather the same chip shortage that quickly became such an incredible ‘pain’ for most other OEMs.

Tesla was also smart in how it approached potential Supply Chain bottlenecks from a tactical perspective. Examples of Tesla’s pragmatic thinking included:

Of course, by virtue of its brand and reputation, Tesla probably has more ‘market permission’ than many other players to act in this way.

However, there is a clear indication that this non-traditional company simply has a different way of thinking and is, therefore. less bound by industry norms and constrained thinking that sometimes exists amongst other players.

There is a strong case that different thinking only comes from different (and differential) people.

Potential ‘Take-Aways’ for the Automotive Industry

Most of Tesla’s rivals rely on automotive suppliers for support, but Tesla designs a lot more of its own hardware and writes more of its own software than its competitors.

Tesla has a team of in-house engineers who design the majority of the software in its vehicles.

Perhaps it is time for other OEMs to consider bringing more ‘mission critical’ activities in-house?

Other lessons for OEMs might also be drawn from Tesla’s approach:

Sustainable battery supply will likely be a key determinant of success in an electrical future. From the outset, Tesla set out to take control of its battery supply chain by building its own Gigafactory in Nevada;

Tesla built in-house capability to write the software code that runs its cars, whereas its competitors have relied on external suppliers for this expertise. This decision gave Tesla the ability to rewrite its code in order to accommodate whatever semiconductors the Company was able to procure;

Tesla’s control over its own software has given it the flexibility to change suppliers and semiconductors as needed;

Tesla’s ownership of onboard computer design and software has allowed it to standardise chips, so each car has fewer chip SKUs to procure; and

Tesla has fewer finished product SKUs. There are only four models of Tesla vehicle, compared to over 40 passenger vehicle models for large manufacturers such as Toyota.

“We’re designing and building so much more of the car than other OEMs who will largely go to the traditional supply base and like I call it, do ‘catalog engineering; … which is not very adventurous.” Elon Musk, ‘Technoking’ - TESLA

Tesla is providing valuable pointers to the Automotive Supply Chain on the power of building in flexibility, seeking design standardisation where possible, and reducing the costs of complexity that large SKU portfolios can bring.

Do you have the same ability to create your own leading Supply Chain approach, based on a solid vision and strong execution?

Of course, many factors influence Tesla’s success – but it is hard to dispute that the company’s approach is both purposeful and impactful. We would argue that innovative Supply Chain thinking has been a critical success factor for Tesla:

Thus, the potential rewards for putting the right Supply Chain systems, processes, technology, and PEOPLE in place are considerable.

At Pedersen & Partners, we believe that there are several questions you can pose as you consider your position relative to today’s Supply Chain challenges:

Most importantly, do you have the right leadership and team(s) to drive success? If not, Pedersen & Partners will be happy to facilitate a discussion with you to determine the critical competencies that your organisation needs – not only to perform better today, but to transform for tomorrow. 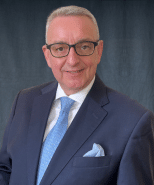 Andrew Thomson is a Client Partner and a member of the Industrial Practice Group at Pedersen & Partners. His 25-year extensive international career has covered Consulting, Human Capital management advisory, and Executive Search; he brings significant cross-border and cultural expertise gained in both developed and high growth/emerging markets. Mr. Thomson mainly focuses on the Automotive sector and ‘New Mobility’, Renewables, IoT and Digital/Tech convergence, but he also has a solid background in Professional Services, C-suite leadership, and talent attraction, as well as Board services, talent and business strategy alignment, strategic revenue growth, and business development. Prior to joining Pedersen & Partners, Mr. Thomson held senior leadership roles in top global Executive Search firms, serving a broad range of clients within the Supplier, OEM, and Retail segments of the Automotive value chain. Moreover, he has undertaken projects for a wide variety of other general industrial and manufacturing players, in fields such as Hydrogen and Solar Energy, Consumer Electronics, and Robotics. Mr. Thomson has completed high level searches in General Management, Finance, Operations, Engineering, and Sales & Marketing functions, working closely with Boards and Executive Team members. His earlier career included 5 years with Touche Ross Management Consulting (now Deloitte), and 18 years with KPMG, where he finished his career 'double-hatting' roles as Deputy COO for the Asia Pacific Region, and Head of Automotive for both China and Asia. Prior to his UK relocation, Andrew spent 17 years working in China and Hong Kong, and also lived in Russia, Singapore, and Bangkok.

Mr. Thomson is an Accredited Board Recruiter and Certified Advisory Board Chair and has held several not-for-profit Advisory Board positions. He has an MBA from Strathclyde Graduate Business School and an MA in Jurisprudence from the University of Oxford. In addition to his native English, he is fluent in Russian and speaks basic Spanish and Mandarin Chinese.

Brian Cartwright is a Client Partner, Global Supply Chain Solutions at Pedersen & Partners. He specialises in Board, CxO and Senior Executive Search, leveraging over 20 years of experience in business leadership, Executive Search, and strategic advisory. He partners with listed and privately-owned enterprises, helping them build management teams that raise the bar to transform and improve the organisations' capability, efficiency, and service levels across the value chain.